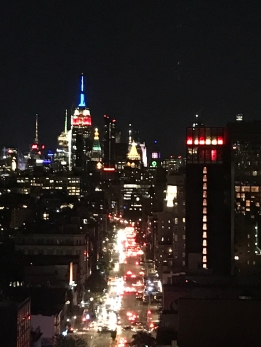 Last May we received an email from I.I., a Tunisian citizen requesting translation help. A non-profit organization had taken charge of his asylum process, but the cost to translate all the evidence was going to be astronomical. We agreed to help.

I.I.’s troubles began in Tunisia in June 2016 when he wrote and published a fictional story on his blog that covered the topic of suicide. The story went viral throughout the Arab world and he soon began receiving death threats from religious extremists who labelled him an atheist.

Later that year, I.I. was kidnapped and beaten by four police officers. Taken into custody without a court-issued warrant, he was held for three days where they kicked and slapped him, and prevented him from sleeping. He was detained in the same jail as dangerous extremists who knew him as an atheist, as he was a public figure with a large social media following. The police claimed they had arrested him for a satirical Facebook post they said incited violence against the president. But he believes he was detained for his human rights activism and his writings. His case remained open until he was sentenced – without any summons or notice – to three months imprisonment in the beginning of 2019. Fortunately by that time he was already in the US on a student visa.

But before he left Tunisia, I.I. was arrested again in March 2017 while attending a workshop in a hotel on freedom of speech and fighting hate speech. The police barged into the workshop and took him to the police station in Carthage. Again, the police had no warrant. The police questioned him about his involvement with the organization that organized the workshop, his travel history, and his future travel plans. They accused him of being a “spy for foreigners,” and threatened to never let him travel again. He was released after 6 hours.

The Ministry of the Interior placed I.I. on the S17 blacklist. People on this list are harassed during document checks as “suspicious individuals,” and their rights to work and travel are restricted.

When he went to inquire about his appearance on the S17 list, the police confiscated his passport and refused to let him leave. A police vehicle arrived 2 hours later and transferred him to a police station in downtown Tunis. There he was asked about all of his activities, including his blogs and Facebook posts. He was even asked about his brothers and sisters, a tactic used to intimidate. Fortunately, a union leader was able to secure his release, albeit without any information regarding his S17 status.

I.I. came to the US in mid 2018 as a student with the help of a customs agent who stamped his passport despite his S17 status. Last week, he was finally granted asylum in the US.

Support from our donors helped fund the translations for I.I.’s asylum application. Thank you so much everyone again for your support. Our new campaign is here. We look forward to sharing  more success stories.

HELP BRING SOMEONE TO SAFETY BY DONATING TO OUR ORGANIZATION

Opening Our Borders and Our HeartsSeptember 23, 2021
Last Day!!!

Our Opening Our Borders and Our Hearts fundraising campaign is in its final days! We’re so close to reaching our goal of $5K!
We are here to help. We provide translation services in Arabic, Dari, Chinese, French, German, Kurdish, Pashto, Russian, Spanish, Swedish, Turkish, and Urdu with more to come. Our services are always free to refugees. We also work with other immigration support organizations to meet their clients’ translation needs.

Opening Our Borders and Our HeartsSeptember 23, 2021
Last Day!!!
Loading Comments...